Mid-September 2021, is a key moment for the further development of the Bitcoin price. It is at this point that we observe the golden cross. This is a good time to look at the on-chain data in more detail.

Let’s start with the on-chain data, the arrival of which we mentioned in the previous analysis. The golden cross, resulting from the intersection of the 50-day (green line) and 200-day (yellow line) moving averages, is just taking place. For many market watchers, this is the ultimate confirmation of the ongoing bull market. However, keep in mind that this is a lagging indicator, motivated by Bitcoin’s rise from areas below $30,000 to the $53,000 level. Nevertheless, historically this type of event has resulted in a continuation of the move. 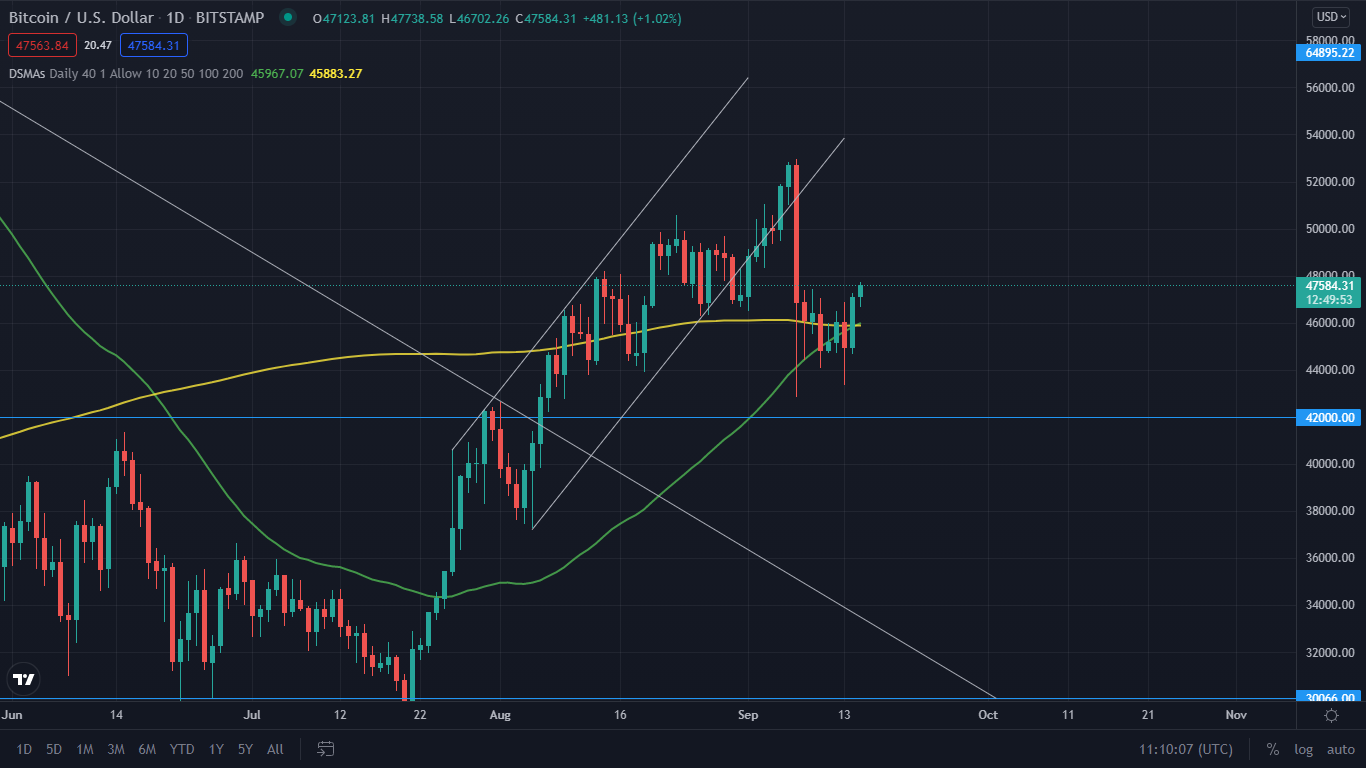 September 7 declines – who was selling?

Let’s also take a look at the recent declines and investor behavior during them. Believing the tools provided by WhaleMap (Twitter: @whale_map), we can see that they were caused by whale movement. We are talking about portfolios that made purchases fairly recently, when the value of BTC oscillated below $40,000. So if we were to look at the Hodl Waves chart, we might see a sell-off of short-term investors, usually associated with young and weak hands. Meanwhile, we are seeing moves in the portfolios of more experienced market players.

The area of most frequent market hand changes

Will Clemente (Twitter: @WClementeIII), on the other hand, shares with us a chart showing the key areas of token distribution. As we can see, BTC is currently trading in the third historically largest of these. The total value of exchanges made in this space, is as high as 9.63% at the moment. The highest trading volume is represented by the candle located around $49,000. The next area is the zone between $53,000 and $59,000. It coincides with the previous indications, presented by us in the technical analyses. 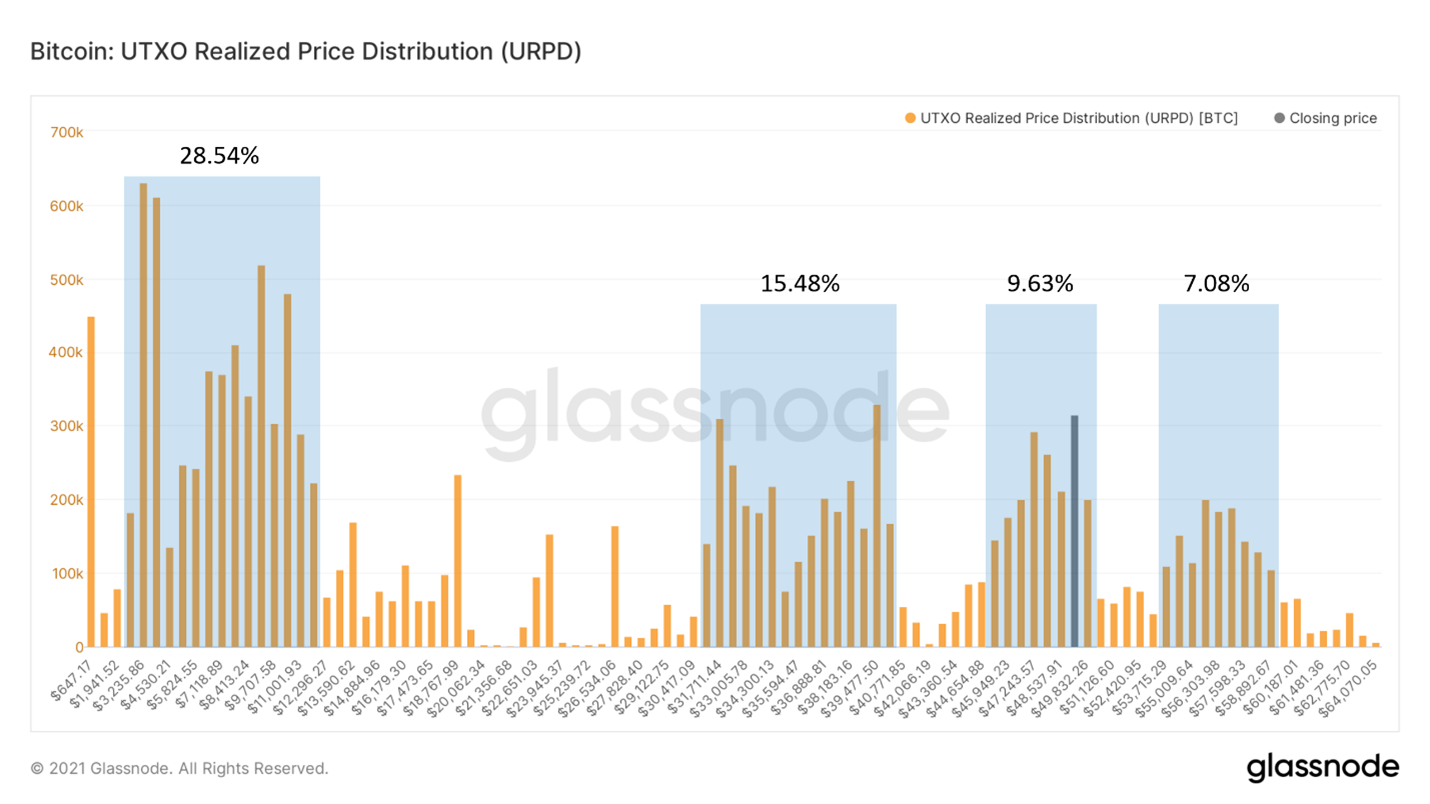 Looking in turn at the data provided by Santiment, we see that the number of daily active BTC addresses does not change significantly. It fluctuates between the area of 640 thousand, to slightly exceed the level of 1 million in the peaks of recent days. This is the zone that Bitcoin has maintained almost continuously since mid-May, which is exactly 4 months ago.

Wallets with a minimum of one Bitcoin

The accumulation process is perfectly reflected by Glassnode data. As the chart below shows, wallets with a minimum of 1 BTC in their holdings have reached their highest point in 3 months. As the chart shows, in the middle of September we have exactly 808,634 of them. This data indicates a positive market sentiment, which is constantly maintained. 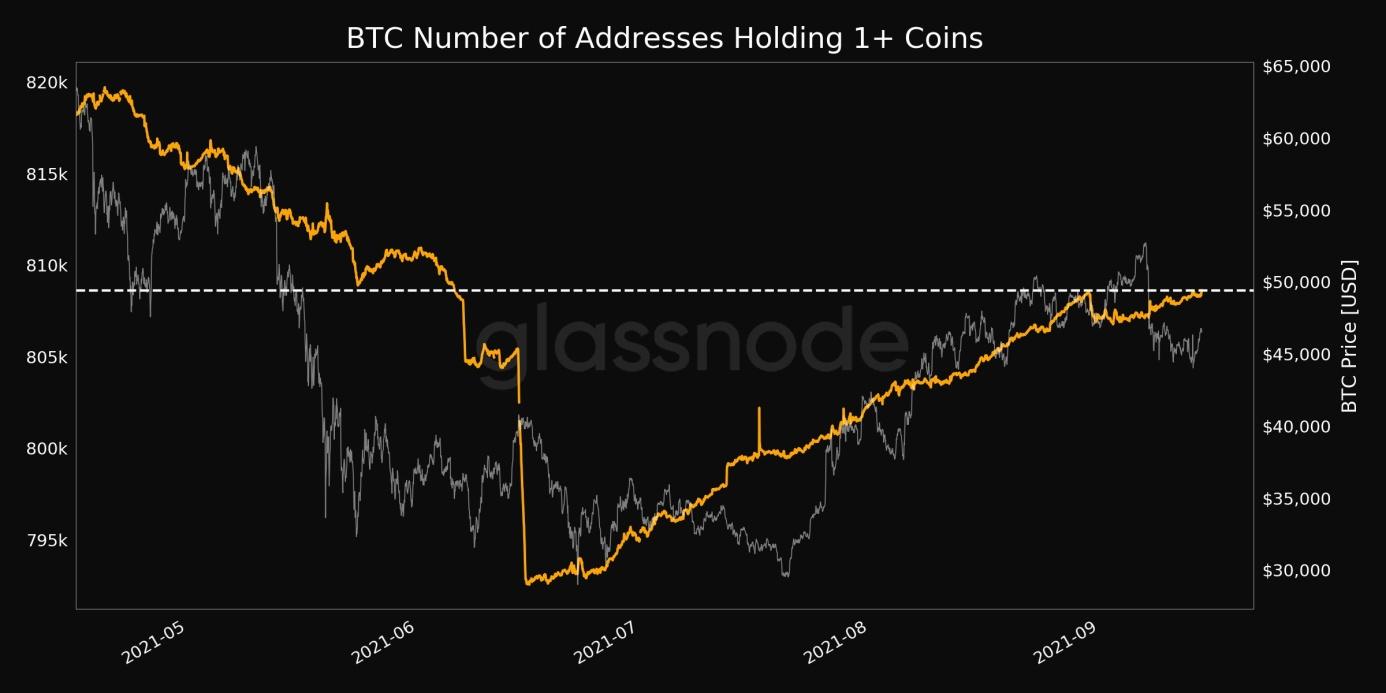 The above figures are worth comparing with others, concerning the holders of a minimum of 0.01 BTC. It has not been known for a long time that the smallest investors are often responsible for dynamic price movements when they crowd the market. As the chart below shows, we are experiencing a significant movement here as well. There are now 9,142,315 holders of at least a hundredth of Bitcoin, and this value represents the highest in 4 months. 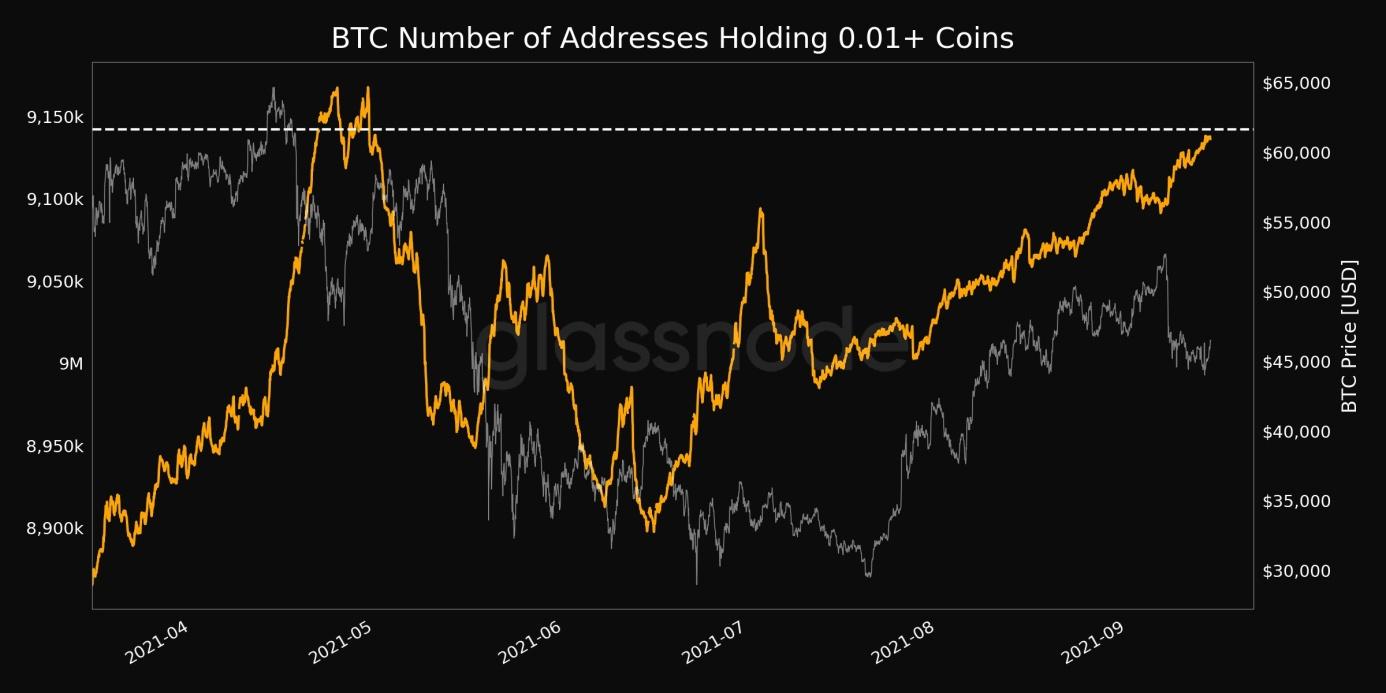 The balance on the exchanges

Finally, it is worth looking at the amount of Bitcoin held on exchanges. These units have very often triggered successive violent avalanches of sell-offs. Meanwhile, the observed data gives a lot of optimism. We have not seen such a low amount since September 2018 and it is exactly 2,463,815.892 BTC. In the long run, this has the power to push the Bitcoin price towards new highs. 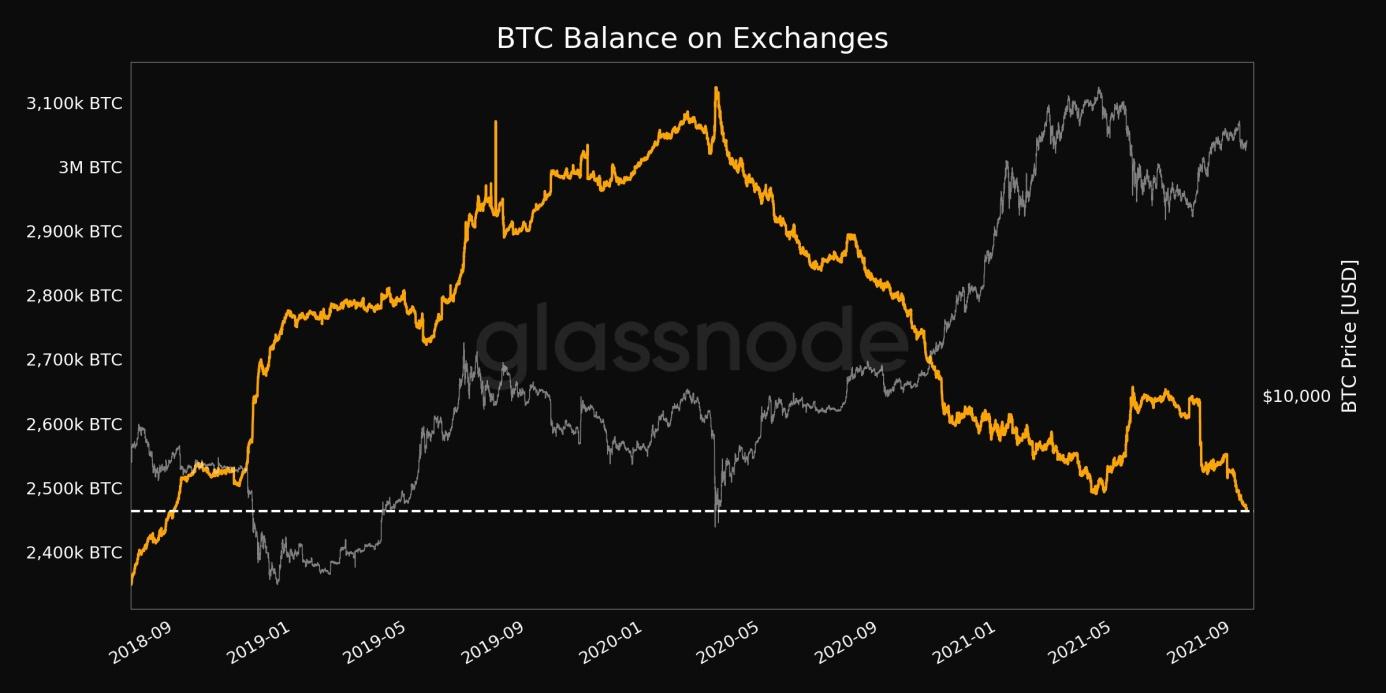 Bitcoin is breaking out of key resistance and may just be moving for a new ATH. Let’s take a look at the market situation of the king of cryptocurrencies and what is happening in the altcoin market. Is $65,000 in range? Looking at

Bitcoin’s bumpy road to new highs continues. This time, the macroeconomy gets in the way. Is Evergrande a black swan? In recent days, great confusion in the global financial markets is caused by the specter of the collapse of the company Evergrande. Shares

Mid-September 2021, is a key moment for the further development of the Bitcoin price. It is at this point that we observe the golden cross. This is a good time to look at the on-chain data in more detail. The golden cross Let’s

Bitcoin’s day in El Salvador, is also a day of strong market correction. The leading cryptocurrency is retreating on the charts by nearly 20%. Causes and consequences We can find many reasons for such a strong correction. However, one is crucial. The introduction

It’s been almost a month since the London Hard Fork and the famous EIP-1559 correction, and in that time Ether is back to price levels not seen since late May. Is this trend likely to continue? Buy the rumors, sell the facts? Not

Cardano (ADA) has definitely been getting investors’ attention lately. The coin, which has been in a long-term consolidation, is suddenly traded at a new ATH of $2.97. What is the reason and what are the potential further moves on ADA?! Visions turn into

The SEC vs. Ripple case is gaining momentum. Along with it comes the increasing price volatility of the XRP token. As a possible result XRP gains almost 75% in just 7 days. Let’s find out what exactly is the cause! Let’s start from

Bitcoin is surprisingly up almost 60% in 20 days. It is also above a key level in the form of the 200-day moving average for the first time since May 21. We present an updated analysis of the price situation of the king

How secure are the cryptocurrencies in your crypto wallet

In this era of growing popularity of cryptocurrencies, security is constantly gaining importance. It seems obvious, but still many market participants fall into traps set

CBDC represents a very special segment of blockchain technology. At its inception, it attracted positive sentiment. However, this has changed significantly over time, to the

Coinbase plans to launch its own NFT and P2P marketplace

It looks like the leading US-based platform for buying and exchanging cryptocurrencies, Coinbase, will soon join the NFT craze. In a blog post dated October

How many people in the world own cryptocurrencies?

You’ve probably noticed that the adoption of cryptocurrencies is growing rapidly. But have you ever wondered how many people actually own this type of asset?

MetaMask is one of the leading cryptocurrency wallets in the world. In a recent blog post by ConsenSys, the company that manages the MetraMask wallet,

The possible future of Bitcoin: according to former Bitcoin developer Gavin Andresen

What will be the future of Bitcoin (BTC), the largest cryptocurrency in the world? This is a question many investors and developers, led by such